Research projects on offer in our Galaxy Formation & Evolution group:

Thermally-pulsing asymptotic giant branch (TP-AGB) stars are the descendants of low-to-intermediate main-sequence stars with masses in the range of ~1-8 solar masses. Their numbers can therefore be used to measure the star formation histories of galaxies over the last few billion years and their detailed properties constrain the chemical enrichment histories of galaxies as well as their dust production rates. Compared to other resolved stellar population tracers (e.g. main sequence stars, red giant branch stars), AGB stars offer some tremendous advantages. They are extremely luminous at near and mid-IR wavelengths, making them detectable out to ~20 Mpc distances, far beyond the limit of most current resolved population analyses. In addition, the fact that their spectral energy distributions peak at long wavelengths makes them much less susceptible to dust extinction. We are about to enter a golden age for AGB studies in Local Volume galaxies. The launch of JWST in Dec 2021 and Euclid in early 2023 is expected to lead to many breakthroughs in our understanding of this enigmatic phase of stellar evolution and how we can use AGB populations to quantitatively constrain the histories of galaxies.  While JWST will excel in deep pointed observations of individual galaxies at unprecedented spatial resolution, Euclid’s 15,000 sq. degree sky coverage will enable a census of AGB stars in hundreds to thousands of nearby galaxies, including those at the very extremes of the mass distribution — i.e. tiny dwarfs and giant ellipticals.  Jones plays a leading role in JWST GTO programs which are expected to deliver data in 2022 while Ferguson is co-lead of Euclid’s Resolved Stellar Populations Working Group, with first data expected mid-2023.  We seek a PhD student to spearhead the analyses of these and other datasets, with several possible directions depending on the interests of the student.

For further details and information about this project, please download this set of slides: 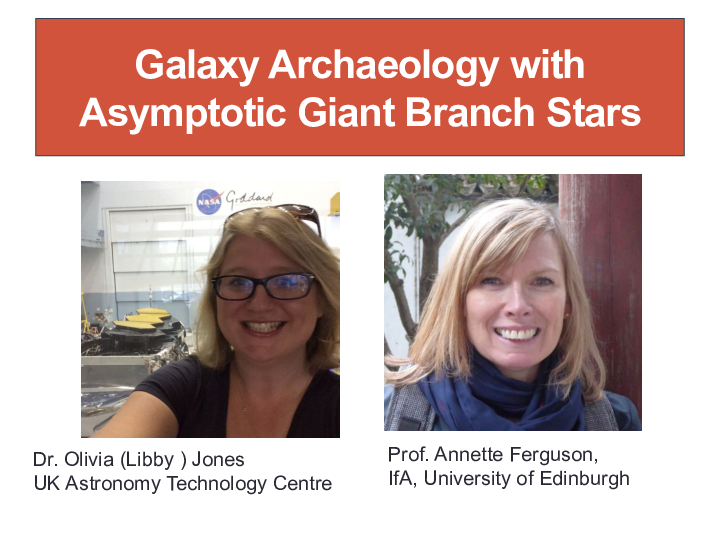 Growing Pains: How do the first galaxies grow?

Shortly after their birth proto-galaxies go through a growth spurt doubling their mass on very short time scales. During this violent phase of their evolution it is likely that their morphological shape and physical properties continuously change. How this change takes place, what the physical drivers are and how these first galaxies look are open questions in modern astrophysical research. These questions are very timely given the upcoming launch of the James-Webb-Space-Telescope, which will b able to probe any theoretical predictions.

This project will aim at using state-of-the-art high-resolution cosmological simulation of the formation of the first galaxies and stars to study the formation and growth of the first galaxies. The simulated data will be used to make predictions and comparisons to available observational data. The student will have access to the simulation data produced by the First Billion Years Simulation, one of the largest simulation of its kind to date. The student will also have access to a dedicated computing cluster to run additional simulations exploring different physical models.

Dust in the universe

Observations of galaxies rely on the information carried by photons to us. Dust in galaxies absorbs and scatters photons from our line-of-sight reducing the amount of photons reaching us and thus obscures the intrinsic properties of galaxies. While we know how to produce dust in galaxies, we still do not know how dust evolves in the habitat of a galaxy. Several physical mechanisms have been proposed that destroy dust. In this project we the student will use high resolution numerical simulations including state-of-the-art models for the production and destruction of dust and make predictions for its evolution. These predictions will be very timely and used to make comparisons to observations of the first galaxies in the Universe with  the James-Webb-Space-Telescope  and the ALMA observatory. Besides running state-of-the-art numerical simulations on super-computers the student will also work closely with observers to make testable predictions.

Understanding the chemical evolution of the early Universe with JWST

After the Big Bang the Universe contained neutral gas composed almost entirely of Hydrogen and Helium. It was only as the first stars and galaxies began to form, during the epoch of reionization, that the Universe started to become enriched by the heavier elements ('metals') that are a product of stellar nucleosynthesis. Therefore, one clear prediction of our cosmological model is that as we look further back in the Universe's history, the galaxies we observe should become more metal-poor. Excitingly, with the successful launch of the James Webb Space Telescope (JWST), it has become possible to directly test this prediction at the earliest cosmic epochs, with the tantalising prospect of even detecting the first metal-free stellar populations that formed after the Big Bang. This project will be based on studying how oxygen and iron abundances in galaxies evolved in the early Universe, with the aim of understanding the metal enrichment of the Universe during the first 2 billion years of cosmic time. The student will perform spectroscopic analyses of high-redshift galaxies from the VANDELS survey (z > 3.5), as well as epoch-of-reionization galaxies (z > 6) that can now be analysed for the first time with JWST. As well as performing observational analyses, there will be opportunity to use state-of-the-art cosmological simulations to directly compare observations to model predictions. This is an ERC funded PhD project and carries a full 4 years of stipend

Next generation sky surveys - notably the European Space Agency's Euclid mission and the "Legacy Survey of Space and Time" (LSST) to be conducted at the Vera C. Rubin Observatory in Chile - are poised to be transformative for studies of the low surface brightness Universe. Both will provide very deep optical and near-IR images across huge swathes of the night sky, enabling the first statistical analyses of the frequency and nature of faint tidal debris across the galaxy population. These features arise due to gravitational interactions between galaxies - for e.g. when a small galaxy gets tidally-shredded upon entering the dark matter halo of a larger system, or when two galaxies merge or have a close encounter - and are key signatures of an important, often dominant, mode of galaxy growth at both low and high redshift. Important constraints on models of galaxy assembly can, therefore, be derived from a better understanding of the prevalence and impact of these events, but the practical problem is how to detect galaxies with tidal features from the vast samples of galaxies to be observed in surveys like Euclid and the LSST. Most previous work has detected faint features around galaxies by eye, but that process will not scale to the Euclid and LSST data volumes, even if it is possible to enlist thousands of volunteers through a Citizen Science project. This PhD project will build on our group's previous work (e.g. Walmsley et al. 2019 MNRAS 483 2968) to apply machine learning to the problem of detecting faint tidal features around galaxies. We have found that Deep Learning algorithms, such as Convolutional Neural Networks (CNNs), shows promise but, like all supervised learning approaches, the utility is limited by the lack of training data. The project will investigate a variety of ways to circumvent this issue, as well as explore a variety of other approaches, such as transfer learning and self-training. The PhD student will join the Low Surface Brightness science working groups of both Euclid and Rubin, and will actively contribute to the development and testing of algorithms that can be applied to the first data in 2024. This is a potential CDT project and is suitable for a student who is independent, very adept at programming and statistics, and ideally already familiar with machine learning approaches to image classification.